The new Olivero theme has an alpha release, so I decided to try it out here. It's a nice modern theme built on CSS grid. It's the work of a number of my co-workers at Lullabot and others in the Drupal community, and it's intended to become a Drupal 9 core theme.

I think it's beautiful. The only alteration I made was to use my own font in my subtheme.

Read more about it on the Lullabot web site. 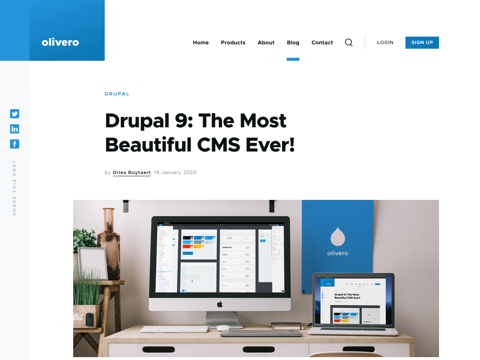 I am doing a kick-start of my blog. I just wiped the old content, which was not that interesting anyway, and I'm starting over. That gave me a chance to rework the infrastructure behind it (a trusty Drupal site of course), and bring it forward to the latest greatest Drupal 8 functionality.

With the extra time I've had from being sheltered in place from the Covid-19 pandemic, I was cleaning out closets and ran into a treasure trove of old clips from my grandmother's newspaper column. Many years ago I started a project to transcribe some of those old columns. I even got my sister Terry and cousin Cynthia involved for a time. And then it languished.  I pulled out what I had and decided to take another stab at getting it posted here.

My grandmother, Lucile Needham Stevenson, was an amazing woman. I've always admired her so much.  She went to college at a time when few women did. Women didn't even have the vote back then! Then she graduated, married my grandfather, and became a farm wife in Streator Illinois. In 1925 she took the pen name of Hope Needham and started writing a daily newspaper column that was syndicated in four newspapers called the Corn Belt Dailies. And she wrote that daily column for nearly 40 years, through the  roaring 20's, the Great Depression, World War II, the civil rights movement and the death of President Kennedy.

In 1965, my uncle Joe went through her old columns (nearly 10,000 of them!) and assembled a small book of excerpts for the family. Later, after she passed away, my father Ernie and uncle Wil joined him to pull out more excerpts and make them into a book. They assembled 130 pages of material, old clips taped to cardboard stock ready for printing. This stack of clippings is what I have in my closet.

I don't have transcriptions for all of it. So I finally just sat down with my scanner and scanned the whole thing into a pdf. I think the rest of the family will enjoy seeing it. And at least I got it captured if I don't get the rest transcribed.

I made a little section for it here.